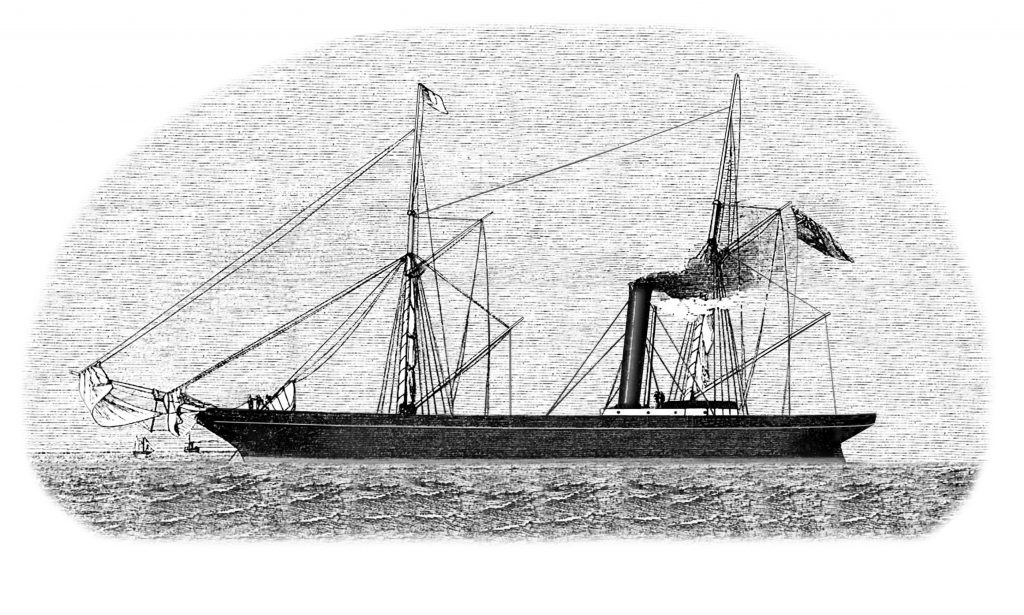 The wreck of the steamer Dalhousie

The story of the River Tay’s worst 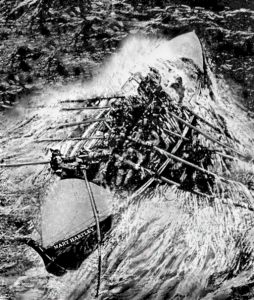 recorded shipwreck began late on the evening of a storm-lashed Thursday, 24 November 1864. The Dundee-bound steamer London was crossing St Andrews Bay when her crew spotted a blue light, then a recognised distress signal, among the breakers off Tentsmuir. A strong gale from the south-east was blowing onto Tentsmuir and, in those conditions, Captain Rattray of the London knew that a rescue attempt would only lead to the destruction of his own vessel and the deaths of his passengers and crew. The alarm was raised as soon as London reached Dundee and, at 2.00 a.m., the tugs Samson and Hercules set off down river, Hercules stopping at Broughty Ferry to take the RNLI lifeboat Mary Hartley in tow. The lifeboat searched for hours among the breaking seas crashing over the sandbars at the entrance to the Tay and, at daybreak, rescued four crew from a Montrose collier that was being driven onto the Gaa Sands on the north side of the deep water channel.

Mary Hartley returned to Broughty Ferry at 10.30 a.m., but it was already clear that the Montrose vessel had not been the vessel signalling distress off Tentsmuir. So the lifeboat was launched again, many of the exhausted, frozen crewmen who had been out all night returning to duty, and towed back downriver. Clearing Tentsmuir Point, Coxswain John Knight could see the masts of a stricken ship amid the breakers about two miles away to the south, on the far side of the Abertay Sands. There was not a moment to lose now as survivors of shipwreck would often, if the masts stayed upright, climb up and lash themselves to the rigging to await rescue. And the quickest way to reach the wreck would be by rowing the Mary Hartley through the huge, storm-driven rollers thundering over the Abertay Sands.

Repeatedly drenched by freezing waves crashing into the lifeboat, Coxswain Knight and his volunteer crew battled through to the wreck at about 2.00 p.m. All that could be seen were the tattered remains of sails flapping eerily from her exposed masts. The hull was under water, but Knight knew the stricken ship well; she was the Dundee and Newcastle steamer Dalhousie and there were no survivors from her fourteen crew and twenty passengers. Among the wreckage littering Tentsmuir Beach were the bodies of Dalhousie’s captain, Henry Glenny, and crewman Tom Bissett from Broughty Ferry. Captain Glenny’s watch had stopped at 12.30 a.m., so it seems that all on board the Dalhousie were already dead an hour before the London’s crew reached Dundee and raised the alarm. 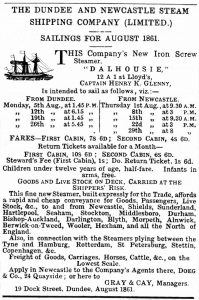 Coxswain John Knight wrote later that the Mary Hartley had been repeatedly swamped as her crew fought their way towards the wreck, but had ‘behaved admirably’. Yet more bodies washed up over the weekend, but it seemed likely that the women and children would have been below decks when the ship sank. They had to be recovered and, once the storm abated, the steam tug Rob Roy went out to the wreck site with diver David Watson. On his first dive, Watson found the after saloon empty and Captain Glenny’s cabin eerily undisturbed; even the furniture was still in place. Returning to the wreck a few days later, he broke into the forward saloon through a skylight and, as he landed on the table below, swept aside what he thought at first were the red tentacles of a jellyfish only to recoil in horror when he realised it was a woman’s hair. As his eyes became accustomed to the gloom in the flooded cabin, the sight that greeted David Watson was horrific; there was a middle-aged woman with a small boy held tightly in her arms and, on the settee, the bodies of two small girls. Swaying gently in the current was the body of the woman whose red hair had given him such a fright.

Watson began the harrowing task of recovering the bodies to the surface and, in an extraordinary coincidence, the middle-aged woman was Jane Cowperthwaite from Tayport, the wife of the owner of the tug Rob Roy. The other woman was Marion Strang who, with her husband John, performed in music halls as ‘The Clevelands, celebrated operatic and Scottish vocalists (who appear in full Highland Costume)’. The three children were theirs; 11-year-old John Strang was the boy found in Jane Cowperthwaite’s arms and the girls huddled together on the settee were his sister Elizabeth aged four and a four month old baby as yet unchristened. Their father’s body was found near St Andrews in February 1865. John and Marion Strang had been due to appear at Springthorpe’s Music Hall in Bell Street, Dundee. Just five weeks after the loss of the Dalhousie, Springthorpe’s would be the venue for yet another disaster when twenty people were crushed to death in a stampede for tickets. 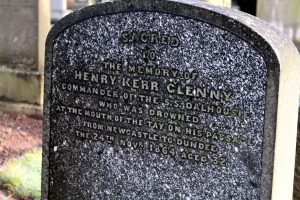 Stripped of anything useful, Dalhousie was left to sink slowly into the sand. But what had caused the disaster and the loss of 34 lives? Known to be stern-heavy, Dalhousie was also carrying a heavy deck cargo when she left Newcastle. Together this would have made her difficult to control in a south-easterly gale and following sea. It seems likely that she was thrown onto her side by a large wave while crossing St Andrews Bay and her funnel, missing when the wreck was found, was torn off. Seawater would then have deluged into the engine room, putting out the boiler fires and leaving the ship without power. The tattered remnants clinging to the masts of the wreck suggest that Captain Glenny ordered sail hoisted in a desperate effort to run his sinking ship ashore. Sadly, they did not make it and Dalhousie’s planned course as she came north on her regular run from Newcastle is shown in blue on the contemporary chart below. Running before a south-easterly gale and a heavy following sea, she was probably knocked down (the nautical term is pooped) and disabled by a large wave somewhere between the hatched red lines. The positions where some of the crew’s bodies were found suggest that they may have been washed overboard at this point. Possibly with the assistance of some of the male passengers, none of whom were below decks when the ship went down, Captain Glenny then hoisted sail and tried to run his ship ashore at Tentsmuir. Unfortunately, he was unsuccessful and the ship sank at the position shown by the red circle (see chart below).

Captain Glenny, who lived with his wife and child in Roseangle, Dundee, is buried in the city’s Western Cemetery. The Dalhousie wreck left eighteen women as widows and 52 children as orphans. Dalhousie remains today the Tay’s worst shipwreck. 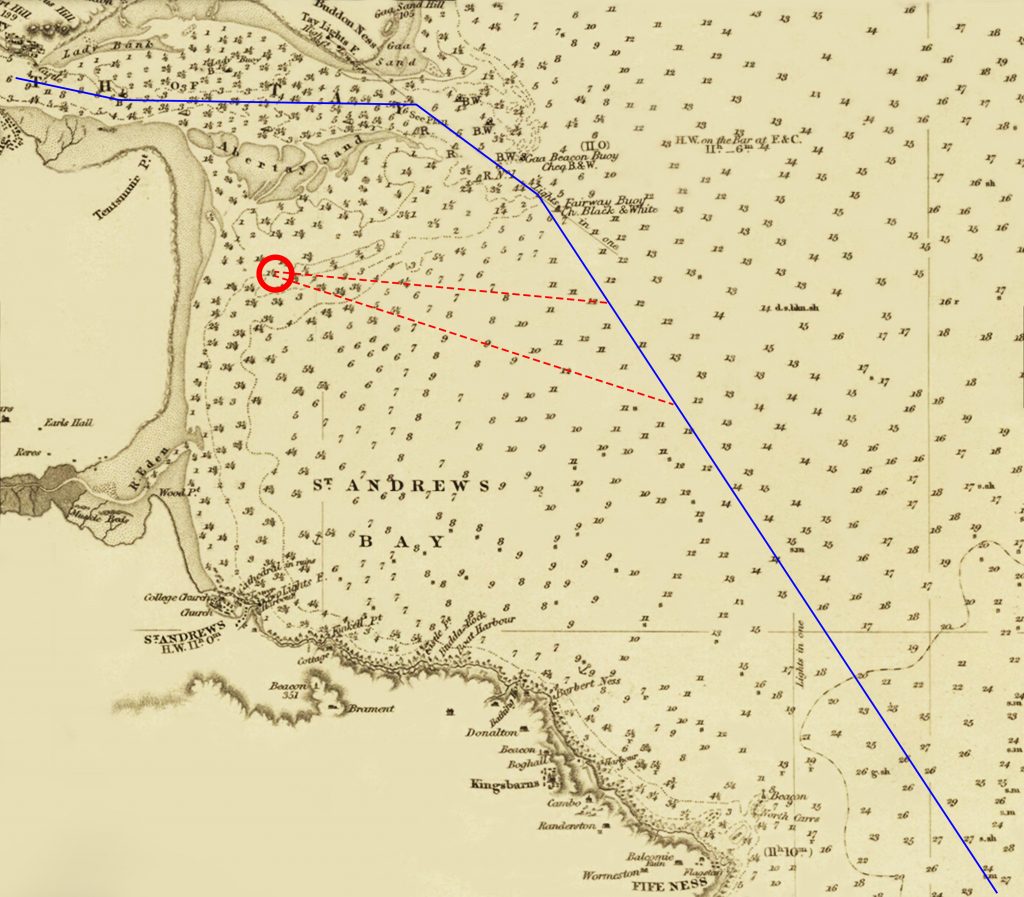